I am not a veteran, though I have the utmost respect for those who have (and do) served this country. I have known my share over the years, and have reflected even upon those whom I never met. I recognize that many have suffered and many were lost. See Remembrance (September 2021). I am beholden to those who have made the life we live possible.
Long before my birth, in another age, there was a conflict on this continent that remains deeply ingrained to this day in all that is America. There is oft disagreement about the Civil War, and those who fought it. There are many perspectives upon the causes of war, and the perspectives that contributed to it. However, death in any instance is troubling, even when women and men are ordered into battle for a cause or supposed cause one does not fully understand or with which one does not agree. History is replete with evidence of such deaths in battles.
The aftermath of such conflict is inevitably sorrow, remorse, and reflection. According to the Constitution Center, our American Memorial Day began when "On May 5, 1868, an organization of Union army veterans," called the "Grand Army of the Republic (GAR)":

"established Decoration Day as a time for the nation to decorate the graves of the war dead with flowers. Maj. Gen. John A. Logan declared it should be May 30. It is believed the date was chosen because flowers would be in bloom all over the country."

On that first recognition of "Decoration Day," a congressman spoke at Arlington Cemetery, and noted:

“We do not know one promise these men made, one pledge they gave, one word they spoke; but we do know they summed up and perfected, by one supreme act, the highest virtues of men and citizens. For love of country they accepted death, and thus resolved all doubts, and made immortal their patriotism and their virtue.”

The Constitution Center goes on to explain that despite this 1868 GAR recognition, some communities had been recognizing those sacrifices as early as 1866 with flowers and "similar ceremonies." Then "Decoration Day" became a "Federal holiday in 1938," with emphasis on those who passed in "The Great War," which was also labelled the "War to End all Wars" (which, I might remind it was not). Then, the "name 'Memorial Day' became more commonplace after World War II," and that name was not eventually "officially adopt(ed) . . . until 1967." So, for the past 50 some years since, we have celebrated Memorial Day on the last Monday in May.
I know, it is not May yet. Stick with me for a few paragraphs on why I am wishing you Happy Memorial Day today.
This is a blog about workers' compensation, which has few parallels to the service of members of the armed forces (my job could become dangerous, but the purpose of a soldier's job is inherently dangerous). But one congruity bears mentioning. Albeit in smaller numbers than in the human conflicts of forces, great and small, people die in occupational settings every day. As the Occupational Safety and Health Administration (OSHA) reminds, "Dying Shouldn't be Part of the Job," and "Safety is Every Workers' Right." Thus, a second "Memorial Day" has been established and observed each April 28 - Workers Memorial Day. Its history is much shorter, attributed to an initial effort of the AFL/CIO in 1989, not yet 50 years ago.
Are those who die on the job any less meritorious than those who die in military service? I would suggest that there are differences, but I would also suggest that those people likewise "by one supreme act" similarly merit our recognition and appreciation. They went to work as we all do, and by some circumstance or happenstance they did not come home. Some because of violence. You must read Ms. LaVoie's recent post The Day My Husband Didn't Come Home from Work (April 2022). But many are instead by accident, inattention, and happenstance. Most, however, are largely preventable or at least capable of precaution and care.
The Bureau of Labor Statistics (BLS) noted that 4,764 workplace deaths occurred in 2020. That is the lowest total since 2013, and equates to a death about every two hours of every day. That is all day, every day, year round. That number is thankfully lower than what we have seen historically. The Economic History Association documents the notable improvements we have seen as this country has maintained focus on workplace safety, implemented workers' compensation, and improved working conditions. BLS provides extensive detail in this regard:

The preceding chart from the Centers for Disease Control demonstrate the improvements over a 15 year period beginning in 1980. The chart below illustrates the change in workplace injuries more broadly and over a longer period, beginning coincidentally with the passage of the Occupational Safety and Health Act in 1972 (which included the focus on workers' compensation, see Friends, Romans, Countrymen Lend me your ears (March 2022). There was a renewed focus on workplace safety in the 1970s and despite much for which we can criticize the OSHA and the National Commission on State Workers' Compensation, the decrease in workplace injury and death is marked, notable, and certainly welcome. 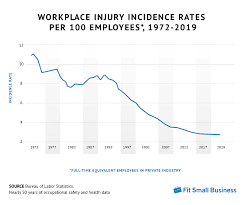 All that said, there remains room for improvement. Though 2020 saw decrease in workplace death, and a notable valley ("lowest annual number since 2013"), 4,764 people nonetheless died at work in 2020. The leading cause was motor vehicle accidents, accounting for 37.3 percent of the total, 1,778 fatal injuries. It is also worth noting that 259 of those deaths were workplace suicides, a reminder of the challenges of mental health services and workplace resources. Other leading contributors to the total were workplace violence and "exposure to harmful substances or environments." In short, there are various issues with which an employer might yet be validly concerned; in the same vein, employees might do well to also take note.
In the end, there will likely always be room for improvement in workplace safety. The focus that has been brought to bear in the last 50 years is laudable, as are these improvements regarding the occurrence of accidents and death. But, there remains work to do, focus to bring, and attention to pay. The point of April 28 is to remember those who have died, who "made immortal their patriotism and their virtue,” perhaps not in the same manner as those who defend us (or perhaps in precisely that way as regards police, fire, and some others). It is to remind us that "Dying Shouldn't be Part of the Job." It is to remind us that workers' compensation plays a significant and vital role in workplace safety and that all workers benefit from its presence, persistence, and protections. We should be thankful for all workers, and the sacrifices that too often occur.
Happy Workers Memorial Day America! And, as a character made famous on a television show decades ago, "let's be careful out there." (Hill Street Blues, MTM Enterprises, 1981-1987).
By Judge David Langham
Courtesy of Florida Workers' Comp