Medical benefits are a significant factor in the overall costs of of most state workers compensation programs. The ability to contain those costs is at the very heart of the viability of most workers' compensation systems. Federal preemption of state medical fee schedules and regulations are a prevailing challenge to the patchwork of non-uniform state benefit programs. 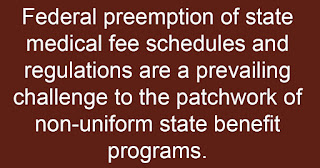 EagleMed, LLC v. Travelers Insurance, decided June 15, 2018 involves the fact that federal Airline Deregulation Act (ADA) expressly preempts state laws and actions regulating air ambulance billing. At the hearing level the Kansas Compensation Board ruled that the air ambulance company was entitled to payment for its full bill. The Kansas Appellate Court reversed due to federal ADA preemption and held that the Kansas Division of Workers Compensation [KWCA] cannot determine the reasonableness of air ambulance charges and the state lacks the authority to adjudicate fee disputes between a workers compensation insurer and an air ambulance provider.

A. The 2012 Fee Schedule Requires Full Payment of

Air-Ambulance Providers' Billed Charges and Is Not

B. The 2012 Fee Schedule Requires Reimbursement

of an Air Ambulance Provider's Own “Usual and

4. The KWCA's Reimbursement Caps Are Preempted

A. A “Fair, Reasonable, and Necessary” Limit on Air-

B. The Other Requirements for ADA Preemption Are

Does Not Mean That EagleMed Must Accept a KWCA

Cap on Its Rates

D. If This Court Finds Preemption, the Next Step Is