The COVID-19 boulder, full of facts, lies, information, misinformation, disinformation, and just plain delusional thinking keeps rolling back down the mountain. Try as we might, it's certainly difficult to make sense of COVID-19. But we keep trying, anyway. As in:

I have written previously about the perplexing case of union participation in America. In 1960, about a third of hourly workers belonged to unions. In January of this year, the BLS reported that number had dropped to 10.3%. Yet, in the same press release, the BLS reports:

Nonunion workers had median weekly earnings that were 81 percent of earnings for workers who were union members ($892 versus $1,095).

Right now we won't get into why this puzzling paradox exists, except to say we now have another log to throw on the pyre.

A new study authored by researchers at George Washington University, the University of Pennsylvania Perelman School of Medicine and the Boston University School of Medicine, published in Health Affairs, found that having a unionized workforce at a nursing home greatly reduces the likelihood that residents or staff will die from COVID-19. From the study's Abstract:

The study analyzed data from more than 300 nursing homes in New York from March 1 through May 31. The authors conclude the unionized health care workers in the nursing homes were able to negotiate for more PPE, higher pay, and better working conditions.

During the pandemic, New York has suffered nearly 7,000 nursing home deaths, more than any other state except New Jersey.

My take on this? If you have loved ones who may be headed for a nursing home, it might be a good idea to ask if the staff is unionized.

Since early in COVID-19, we've known that many people, fearful of the disease, have put off getting routine, or, in some cases, emergency medical care. What we have not known is what demographic groups are doing that and to what degree. Now, the CDC has put a full stop period to that issue.

In its 11 September weekly Morbidity and Mortality Report, the CDC published a comprehensive analysis concluding 40.9% of U.S. adults delayed or avoided medical care as of June 30. This includes urgent or emergency care (12%) and routine care (32%). Regarding what population segments are doing this, the study had this to say:

So, Mary, taking care of her aged mother at home, foregoes either emergency or routine care at nearly three times the rate of Sarah, her next door neighbor who is not burdened with an aged relative, because she doesn't want to bring COVID-19 home to Mom. Even more troubling is that people with two or more co-morbidities forego care at nearly two times the rate of people without such underlying conditions.

The CDC's paper advises that, “… urgent efforts are warranted to ensure delivery of services that, if deferred, could result in patient harm.”

*By way of example for the statistically challenged, an adjusted prevalence ratio of 2 means that the prevalence of cases among a study group is 2 times higher than among the control subjects. It's calculated through a series of regression analyses. There. Now you know.

COVID-19 has sucked all the air out of any national attempt at healthcare reform, while revealing in sharp detail the foundational flaws in the current system. Eventually, however, America is going to have to confront this issue in a meaningful manner. Healthcare cost in America is still twice the average of all 37 member countries of the Organization for Economic Cooperation and Development (OECD), and Americans still have poorer health and lower life expectancy than the average of the member countries (78.7 versus 79.5)

In its latest Health At A Glance publication, the OECD updated its life expectancy data, as shown here: 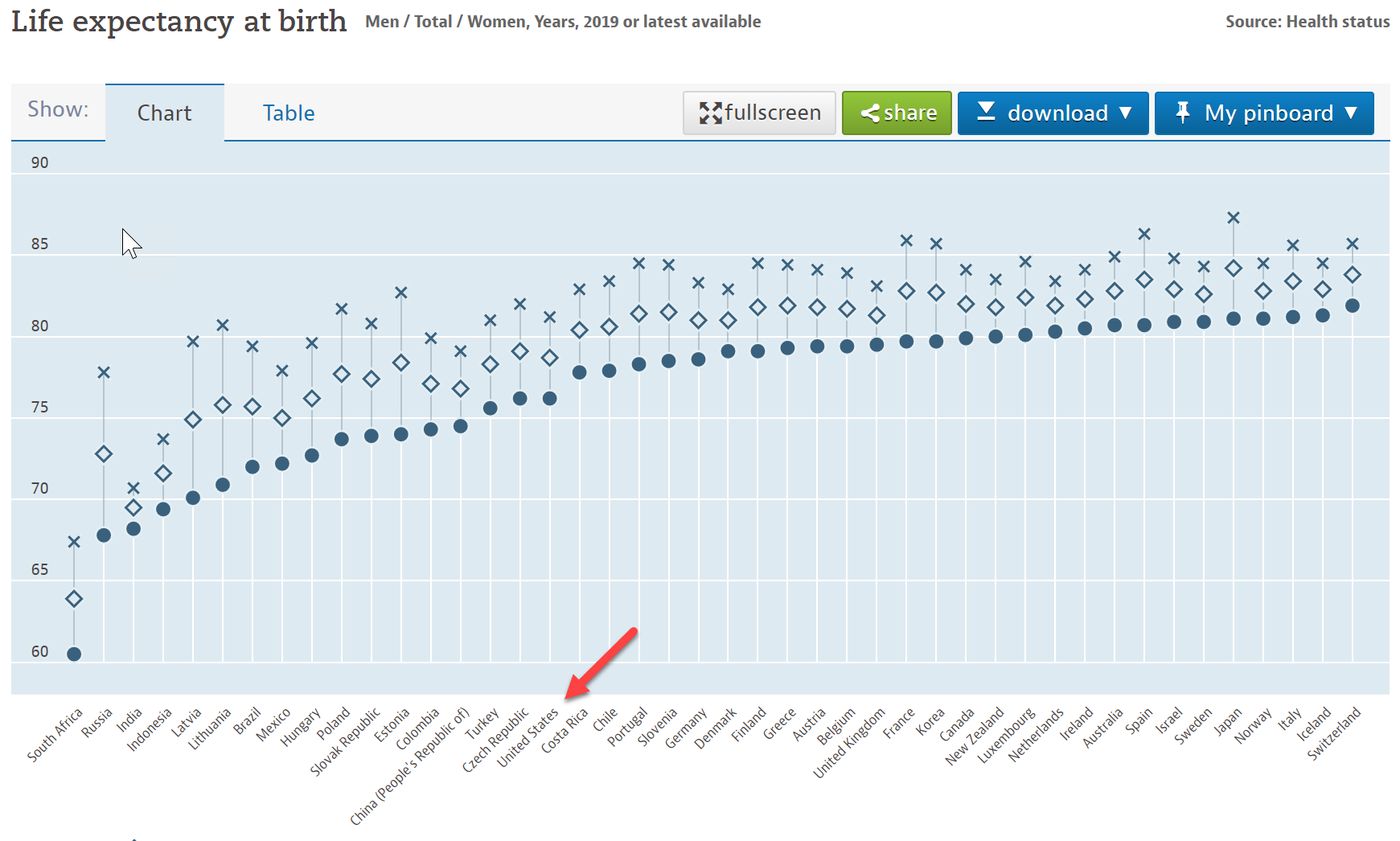 There are many cracks in our healthcare house that Jack built. Ignoring them is not a strategically viable plan for improvement, improvement that all citizens deserve.

To quote the venerable A. E. Housman, “Terrence, this is stupid stuff.” Another example of our woebegone healthcare system.

Last night, during an ABC-TV Town Hall Meeting President Trump once again pilloried cities and states run by Democrats and blamed their leaders for any problems with the response to COVID-19.

A little contextual background is required here. On 14 April, Trump asserted “absolute authority” to control the nation's response to the pandemic, saying, “When somebody is president of the United States, your authority is total.” He made it clear he would be in charge and the states would have to fall in line.

Two days later, he reversed himself on a call with all the governors, telling them, “I've gotten to know almost all of you, most of you I've known and some very well. You are all very capable people, I think in all cases, very capable people. And you're going to be calling your shots.”

Since then, he has repeatedly repeated the “You're on your own” line. The result, of course, has been that we have seen 51 different plans and approaches with varying degrees of success.

On 24 June, Nevada Governor Steve Sisolak imposed certain restrictions, among them the requirements that all Nevada residents wear masks when in public and that no more than 50 people, socially distanced, congregate in one place.

Enter Donald Trump and his the-sky-is-the-limit indoor rally of last Sunday evening at Xtreme Manufacturing in Henderson, Nevada. Fire officials estimated the size of the crowd was 5,600 people, nearly all of whom were maskless (except for the people right behind Trump who were constantly on full TV view). 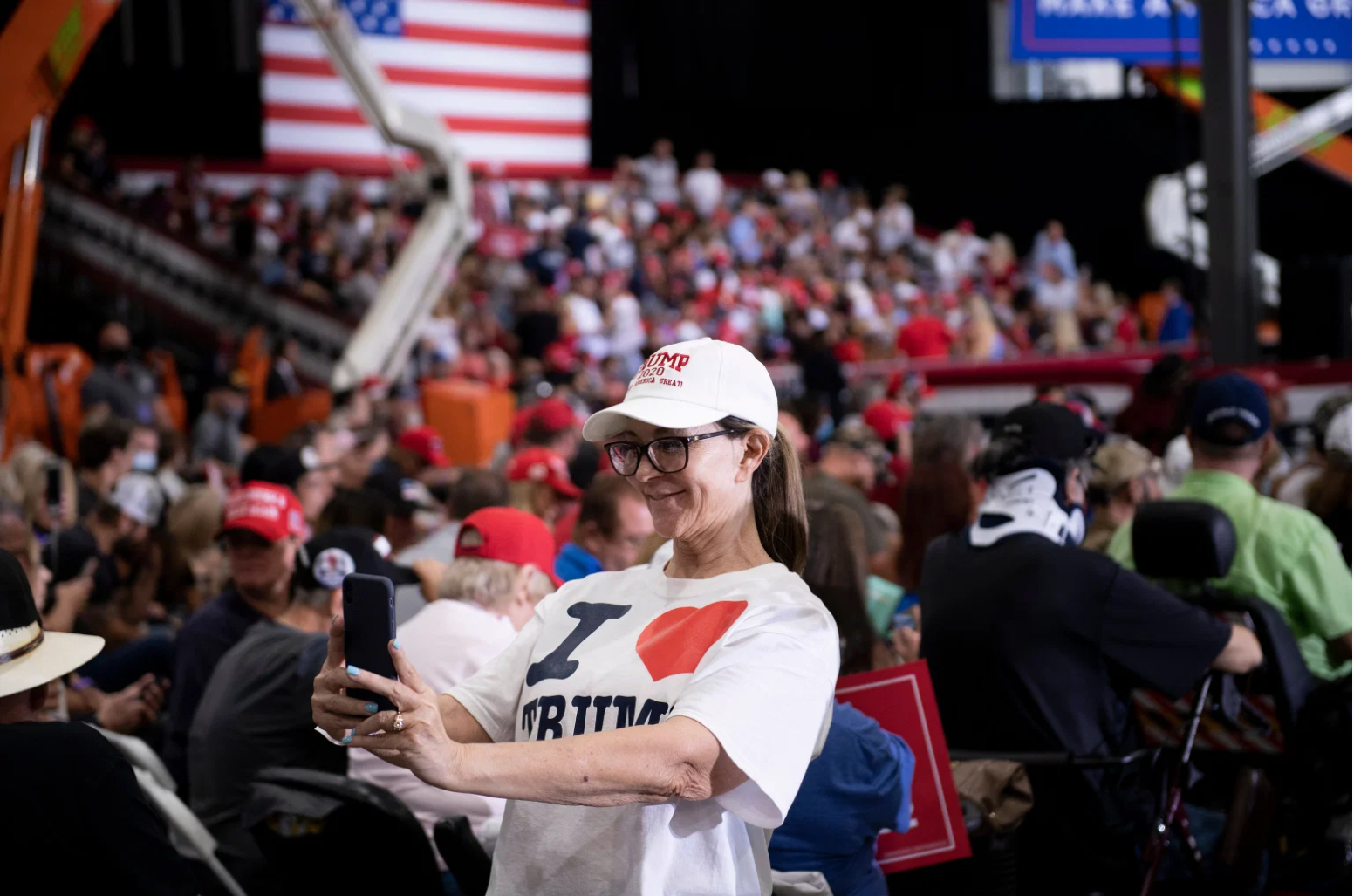 Just as we saw in Tulsa after his previous rally, we'll probably see a spike in cases in Nevada in two to three weeks.

Beyond the nonchalant and willful endangerment to peoples' lives, what bothers me most of all about this event is Donald Trump's cavalier and metaphorical raising high of his two middle fingers to Nevada's scientifically-based efforts to keep its citizens alive. After repeatedly telling the nation's governors they should do what they think they need to do to combat COVID-19, this “law and order” president, without compunction of any kind, imperiously violates the law while telling his large crowd Nevada's Governor Sisolak is “a hack” and “weak.”

Allow me to close with Joseph Welsh's question to Senator Joe McCarthy on 9 June 1954: “Have you no decency, sir?”