It is hard to believe that it has been a month, but the Division of Workers' Compensation released its September COVID-19 report on Monday, covering the data available through August 31, 2020. As noted in past posts, the Florida Division seems to lead the pack in terms of keeping information flowing. I have previously posted regarding the developing data on such claims in COVID Florida Filing Update August, Florida COVID Claims June 2020, and COVID-19 in Florida Claims. The latest report includes information on COVID and other factors are impacting insurance premiums as well.
As of August 31, 2020, the Division has information on 17,653 COVID-related workers' compensation indemnity claims. Any "medical only" claims are not included in the figures. Those might be significant in terms of volume (many claims potentially for testing perhaps), but are less likely to be significant in terms of costs expended. The 17,653 are divided into "open" (6,933) and "closed" (10,720). A total of $22.5 million has been paid on these claims (in indemnity and medical benefits), which is 6.8% of the Florida overall claims cost.
The report likewise divides the 17,653 COVID-19 claims into the categories of "compensable" (9,893/56%), "full denied" (7,728/44%), and "partially denied" (32). The preponderance of payments ($22,186,002/98%) is attributable to the "compensable" category, as would be expected. That payments are attributed to the other categories may reflect payments made in error or payments made during investigation of the compensability determination.
Beginning with COVID Florida Filing Update August, the Division provided information regarding the severity of claims in terms of financial cost. That information is also presented in the September report. September demonstrates now two claims in the "over $500,000" category, with a total paid on two claims of 1.47 million. Two important points: (1) the potential exists for very severe claims from the Sars/CoV-2 infection that causes COVID-19, and (2) thankfully, the most severe cases are not frequent.

As noted regarding the prior reports, the preponderance of the volume (55%) and dollar expenditures (67%) are in the Miami, Ft. Lauderdale, "not indicated," and West Palm Beach areas. However, the data suggests that some significant claims have occurred in Leon County as monetary expenditures there are over $1.2 million, though only 142 total claims. While multiple counties (Taylor, Dixie, Bradford, Franklin, Hendry, and Lafayette) reflect payments under $2,000 total, only Hendry County reports $0.00 in benefits paid.
The report notes that those three counties similarly accounted for the largest volumes of COVID-19 positive tests in Florida: Miami/Dade (159,059/25%), Ft. Lauderdale/Broward (72,245//11%), and West Palm Beach/Palm Beach (43,387/7%). Those three counties account for 43% of the Florida Diagnoses overall, but 55% of the COVID-19 claims and 67% of the claim expenditures.
The distribution of indemnity claims has been illustrated in each of the four reports thus far. There have been fluctuations noted in the data, likely due to increasing volumes of information and clarification. But, notably the predominant portion being attributable to health care workers at the end of May (57%) has diminished, though the volume of claims for such workers has continued to increase. The volume in protective services has been more marked in the months since June, leading to a reasonably similar portion for these two occupational groups (29%/34%) in the September report. 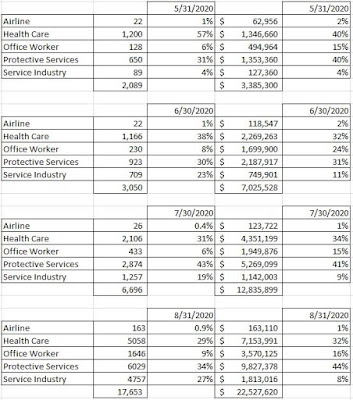 Notably, the September report memorializes there have been 24 COVID-19 compensable death claims to date. This represents a very small portion of the compensable claims overall. This rate is below the overall mortality rate for COVID-19 in the U.S., as reported by Johns Hopkins. Despite this, it is troubling to see this volume of deaths reported. Overall, despite significant safety focus and progress, on-the-job death continues to occur in significant numbers according to the National Safety Council.
The data supports that overall women (9,553/54%) are more likely than men (7,918/45%) to report a work-related COVID-19 diagnosis.
Overall, the September report is another solid effort to illustrate and describe the ongoing impact of COVID-19 and Sars/CoV-2 on the Florida workforce and workers' compensation. It is worthy of review and attention to any who study this system or are responsible for claims decisions within it.