Washington, DC (WorkersCompensation.com) - The National Transportation Safety Board issued Thursday the final report for its investigation of the June, 10, 2017, Queens Village, New York, railroad accident in which a railroad roadway worker was struck and killed by a train.

The accident occurred when a Long Island Rail Road train, on track three in multiple track territory, approached a five-member crew of roadway workers in the Queens Interlocking. The foreman and two roadway workers were conducting a walking inspection and making repairs on track one. They were accompanied by the watchman. The fifth roadway worker was clear of the tracks. The watchman noticed the train approaching on track three, sounded a handheld horn, called out to the other workers and raised a paddle as a visual signal to the LIRR's locomotive engineer to sound the train's horn. When the engineer sounded the horn, three of the roadway workers remained on track one but the foreman stepped into the path of the traveling train on track three and was struck and killed. The train was traveling about 78 mph when the locomotive engineer applied the emergency brakes just before impact.

The NTSB noted in its report the train approach warning method was particularly dangerous for the crew working on the Queens Village Interlocking. Several factors, such as the multiple tracks at the interlocking, trains operating at high speeds in both directions, and the crew having limited areas to clear trains, combined with the additional train traffic due to the Belmont Stakes, increased the risk of the work crew being struck by a train. The watchmen on duty at the time should have given the workers timely warning of approaching trains and all workers should have cleared to the tracks before the train's arrival, the NTSB concluded. 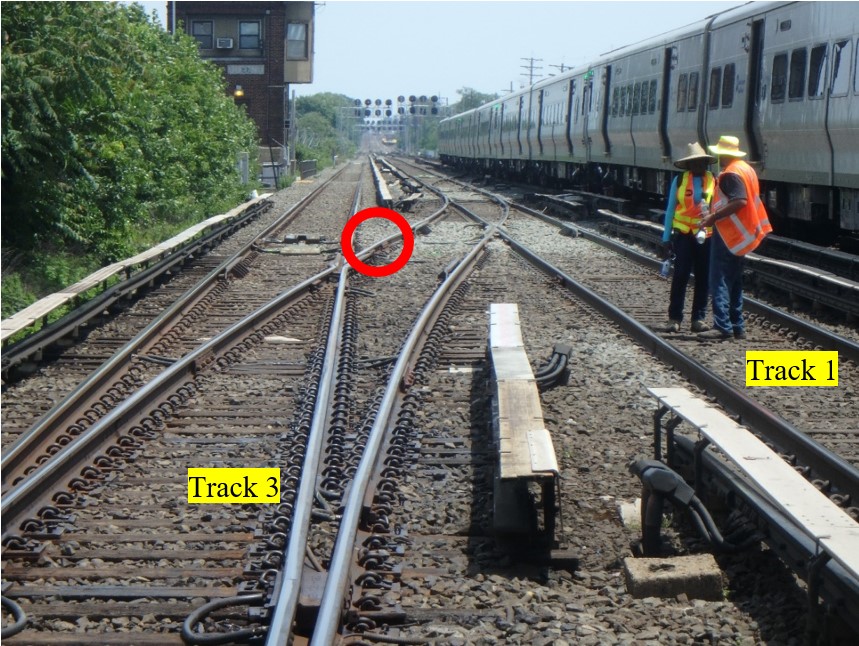 (This photo illustration depicts the accident scene on June 11, 2017.The photo was taken at track level from the east end of the Queens Village Station. The point where the roadway worker was struck by the train is marked with the red circle. NTSB photo)

“Using the train approach warning method, LIRR management did not properly assess the hazards the roadway workers were exposed to while conducting their tasks,” said NTSB Chairman Robert L. Sumwalt. “If adopted, the recommendations highlighted in this report, can help to mitigate the risks associated with this work and provide better protection to workers across all railroads.”

Contributing to the accident was the railroad's and union's allowance of overtime work schedules without properly considering and mitigating workers' risk of fatigue. The NTSB noted the watchmen and foreman had consecutive overtime shifts that disrupted their opportunities for restorative sleep during the 48 hours prior to the accident.

The final report is available at https://go.usa.gov/xvMcv.

The public docket for this investigation is available at https://go.usa.gov/xvDkp.