Some Canadian litigation recently came to light in the news. The Canadian Supreme Court has heard the petition of Bela Kosoian. Global News reports that She was in a "Metro station in the Montreal suburb of Laval in 2009." She was apparently using an escalator without holding the handrail when she was confronted by "a police officer" who "told her to respect a pictogram" and to "hold the handrail." Website TheCourt.ca notes that when arrested, Ms. Kosoian was 38 years old and declined to hold the rail because of "germs on the rail."

Ms. Kosoian declined, explaining to the officer that she "did not consider the image . . . to be an obligation." A "pictogram" or "pictograph" is being used there to refer to a sign that conveys behavior, though those two terms may be less than descriptive. When asked, she also "refused to identify herself." The officer called for "backup" and Ms. Kosoian was "taken by force." She was later released after being issued "two tickets - one for $100 for disobeying a pictogram and another for $320 for having obstructed the work of an inspector" (likely the refusal to identify herself.

Ms. Kosoian proceeded to trial on the tickets and was "acquitted of the two infractions." She then filed a $45,000 lawsuit against the Metro, the city, and "one of the officers." A Quebec court dismissed the lawsuit, and an appellate court affirmed that conclusion. The appellate court "said Kosoian was the 'author of her own misfortune,'" essentially concluding she should have just grabbed the handrail when told to, or perhaps merely identified herself when asked. Some may agree with how easily she might have done so, others will be troubled with someone "taken by force" by multiple officers in response to refusing to identify oneself.

Notably, the appellate court was divided. One Justice concluded that the police officer was "justified" to arrest her “because she had refused to identify herself.” Another concluded that an “honest but false belief” that the pictogram was some form of mandate did not "clear him (police) of responsibility." It might be that the justices were not even in agreement as to what issue should be decided?

Ms. Kosoian then sought review by the nation's highest court. The Court's response, and resulting headline made this intriguing: "Supreme Court to hear case of woman arrested, ticketed for refusing to hold escalator handrail." The Supreme Court of Canada will decide whether the police office acted appropriately in enforcing a pictogram that encouraged or perhaps required holding the handrail. 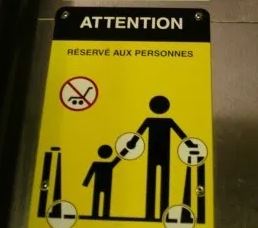 In March 2019, the Court granted the Canadian Civil Liberties Association (CCLA) motion to intervene. In April 2019, the Court docket noted "Judgment under advisement." Ms. Zwibel, a director of the CCLA blogged on the case, asking "What Happens when the Police Arrest you for a Non-Existent Offence?" Ms. Zwibel describes that the police "arrested, handcuffed, and searched the backpack of Ms. Kosoian." She rather sarcastically describes Ms. Kosoian's refusal to provide her name as resistance, and noted that the police "giv(ing) her a ticket for her deplorable actions."

Ms. Zwibel admits that the "facts sound trivial," and proceeds to outline the Supreme Court appeal as more fundamental. She describes four legal issues perceived as pressing: (1) "When does the law require you to provide your name to the police?" (2) "Can a pictogram form the basis of an offence?" (3) "What happens when the police arrest you for a non-existent offence?" and (4) should the police "bear liability when an error has been made in conducting an arrest?" Another blogger has characterized the police actions as overboard, asking rhetorically "Do cops in Canada bust into people's houses to see if mattress tags are still attached?"
One perhaps wonders if a Canadian police officer might ticket someone for ignoring more generic signs like: "watch your step," "wet floor," or "do not touch?" I realize by this point that Statler and Waldorf may be asking once again "what does this have to do with workers' compensation."
Of course, in a workplace there may be many warning signs. Since the creation of the U.S. Occupational Safety and Health Administration in 1970, there has been significant focus on workplace safety. And, that has produced results. in December 2018 IA Magazine reported that "fewer people are getting hurt." It quotes National Council of Compensation Insurance (NCCI) data supporting that workers' compensation "claims frequency" has demonstrated a "4% improvement . . . over the last 20 years."
Some degree of that improvement may well be attributable to various pictograms and signs that have become commonplace in workplaces, including "hard hat area," "danger forklift trucks," "flammable material," "high noise area," biological hazard," or "pinch point." There have been many signs installed with more generic "caution," "danger" and "warning" messages. And, there are the even broader signs and pictograms that remind us daily to simply "think safety," or similar.
Signs are not a panacea or "cure-all." It is likely that we all periodically ignore signs that encourage our attention to safety. Few drivers seem to obey the yellow highway signs of cautioning lower speed on a highway off-ramp. Perhaps such warnings are good for everyone to consider, but not so enforceable upon us all? That may be a question answered by the Canadian Supreme Court. Can a pictogram be enforced? Is there a foundation for such a prosecution?
But, the realm of safety in the workplace is not criminal. That plethora of signs and rules in the workplace is not a foundation, at least as yet, for criminal prosecution of workers that fail to obey safety rules. However, there are potentials for penalties to be imposed upon employees that act in an unsafe manner. Somewhat counter-intuitively, there are fault penalties in these "no-fault" systems in which we labor.
One provision in the Florida law is the "safety device" provision found in section 440.09(5):

Thus, there may be financial penalties associated with the "knowing refusal" of either safety equipment or safety rules. There is that "brought prior to the accident to the employee's knowledge," clause that may make us think of a sign or pictogram that reminds and informs of "hardhat," "do not enter," or other rule.
Obviously, there is benefit to safety rules and to our awareness of safety. We are appropriately encouraged to take care and to be vigilant. If there is an accident, there are a variety of potential outcomes in the analysis of who will pay, but in the end Someone has to Pay, whether that is a financial or physical suffering. In American workers' compensation, it is not uncommon for a jurisdiction to assign fault for failure to comply with safety rules.
In the Canadian situation, there are those who will agree with Ms. Kosoian, and perhaps others will agree with the police. Some will argue that there is clear distinction between financial loss in a workers' compensation setting compared to criminal arrest ("by force") and prosecution. Some will see a distinction in that there was no injury to Ms. Kosoian. If her refusal had resulted in a fall, closure of the escalator to everyone's inconvenience, summoning of a state-compensated ambulance and expenditure of universal medicine benefits, would some feel differently? Or, might some insist simply a rule is a rule?
In time, we will learn how the Canadian Supreme Court sorts out these questions. Many will continue to be amazed that such an issue ever reached a country's highest court. But, regardless of the details and the outcome, we can all likely agree that preventing injury is a positive thing. And, whether we obey them or not, perhaps it is in all of our best interest to at least strive to notice those prolific safety warnings with which we are forced daily to co-exist?