Why are California's work comp costs so high?

California has 380 physicians per 100,000 population, whereas the US has 295 per 100,000 – that's many more docs looking to do many more procedures on the same number of patients. Unlike market-driven businesses, in healthcare supply creates its own demand. 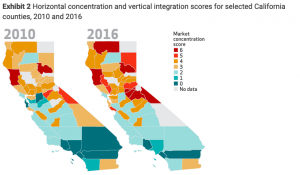 The lower the number above, the fewer health systems competing for business

60 percent of healthcare markets in California are highly concentrated, so the dominant provider systems have much more pricing power – which leads to higher health insurance premiums – than in days past. According to HealthAffairs:

If health systems can jack up prices to giant group health insurers by 12 percent, imagine what they are doing to work comp payers – who represent perhaps 2 percent of their total business.

Unlike most other states, plaintiff attorneys are compensated for a seemingly endless variety of filings, medical management disputes, disagreements, hearings, UR and IMR disputes.

As reported by CWCI in last week's annual meeting, Texas had 1506 dispute letters, while California had over 180,000. Texas saw a decline over time as providers realized that no matter how many times they asked to get a specific procedure authorized, the answer was consistently no.

Not so in California, where the same providers keep flooding the system with appeals for the same stuff, knowing full well they will be rejected.

The good news is several of last year's top IMR appellants are no longer in the top 10, as they're no longer allowed to deliver medical care.

Attorneys get paid to dispute the higher volume of services prescribed by a larger number of providers employed by healthcare systems that have a lot more pricing power.