Raleigh, NC (WorkersCompensation.com) - Struck-by incidents followed by falls caused the largest number of work-related deaths statewide in 2017 based on preliminary information released today by the state Department of Labor. Struck-by incidents accounted for 14 work-related deaths while falls accounted for 13. There were 40 total work-related fatalities that fell under the jurisdiction of NCDOL's Occupational Safety and Health Division in 2017, 10 fewer than there were in 2016. 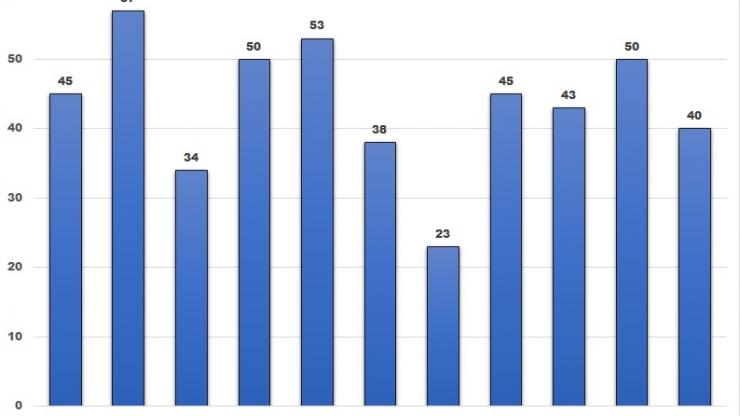 “These are not just statistics on a page,” Labor Commissioner Cherie Berry said. “We never lose sight of the fact that these are human lives lost at work, and we will continue to do everything that we possibly can to prevent such work-related deaths in the future, but we cannot do it alone. A national safety stand-down to prevent falls in construction will take place in May, and I would like to take this opportunity to encourage all construction companies, both commercial and residential, to dedicate time during the week of May 7-11 to focus on fall prevention efforts and training so that together we can prevent them from happening on construction sites statewide.”

Part of the OSH Division strategy to reduce work-related fatalities includes encouraging employer and employee participation in various outreach activities planned throughout the year that promote occupational safety and health. The OSH Division also collaborates with businesses and organizations that represent some of the most hazardous industries through partnerships and alliances to heighten industry awareness and assist with education and training.

“The OSH Division is cautiously optimistic about the decline in workplace fatalities for 2017,” said Kevin Beauregard, director of the OSH Division. “However, to ensure continued progress towards our goal of fatality reductions, we will focus our efforts in the coming year on those areas that are still in much need of improvement. With struck-by incidents and falls accounting for 68 percent of the fatalities the OSH Division investigated last year, we are in the process of reassessing our division strategies to address those hazards.”

“The OSH Division will increase compliance activity in some of the construction special emphasis counties in the spring, especially those identified as having high activity or multiple fatalities,” Beauregard said.

There were no work-related fatalities in 71 of North Carolina's 100 counties. Mecklenburg and Pasquotank each led with four fatalities. Buncombe, Burke, Forsyth, Nash and Wake experienced two each. Twenty-two counties experienced one fatality.

The state figures exclude certain fatalities that fall outside its jurisdictional authority. These include traffic accidents, which account for nearly half of all work-related deaths, as well as homicides and suicides that are investigated by law enforcement agencies. The count also excludes fatalities investigated by federal OSHA and other exemptions in which the department does not have the authority to investigate, such as on farms with 10 or fewer employees.

Federal figures compiled by the U.S. Bureau of Labor Statistics, with cooperation of NCDOL, include all work-related fatalities. The federal figures can be found on the BLS website at www.bls.gov/regions/southeast/news-release/fatalworkinjuries­­_northca....

“While one fatality is too many, we are encouraged by the injury and illness data released by the feds that show the Tar Heel state remains one of the safest states in which to work with a rate below the national average of 2.9 per 100 full-time workers,” Commissioner Berry said.

In addition to the National Safety Stand-Down scheduled for the week of May 7-1, the National Safe and Sound Campaign will take place Aug. 13-19, with a goal to promote the understanding and adoption of safety and health programs.

The OSH Division will participate in the National Utility Contractors Association trench safety stand-down the week of June 18-23.